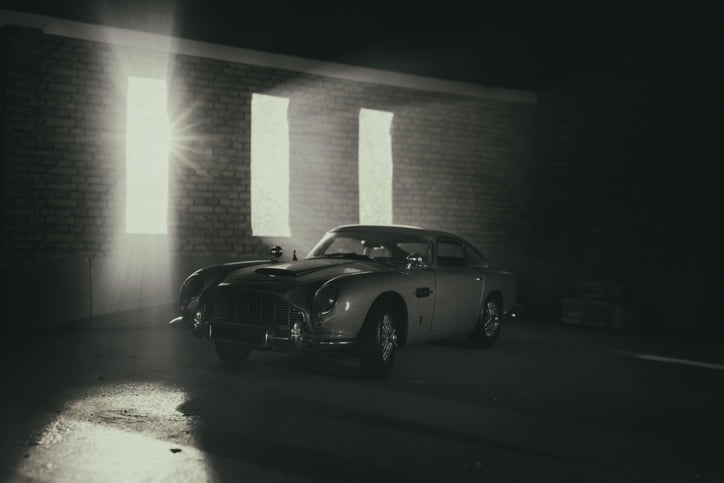 Classic Car of the Month: An In-Depth Look at the Aston Martin DB5

Billed as “the most famous car in the world” by automobile and film connoisseurs around the globe, the James Bond Aston Martin DB5 might be the most easily-recognized vehicle among the world population as a whole. What could compare to machine guns that eject from the taillights, a working smokescreen, and a slew of other (working!) gadgets that decked out the ultimate spymobile? Few other classic cars boast the same level of recognition and fame. This silver birch Aston Martin might have been the envy of all wannabe spies from the mid-1960’s through today, but the stunning craftsmanship only serves to back up the stunning specs that lie under the bonnet of the much-acclaimed Goldfinger roadster.

Although many classic car collectors would love to claim their silver birch DB5 was one of the cars used in the filming of Goldfinger or Thunderball, Sean Connery only drove one model during the filming of the movie. Other DB5’s included two fully-gadgeted publicity cars. The car was released to the public in both sedan and convertible configurations, with an optional steel hard top on the convertible.

In terms of design, the Aston Martin DB5 wasn’t much of a divergence from the DB4. The biggest upgrades happened under the hood. The DB5 featured a 4 litre engine with a bore increased to 96mm. The DB5 also featured not two but three SU carburetors, and it introduced a synchromesh ZF 5-speed gearbox. Topping in at speeds of 229 kph, the DB5 went from 0-100 kph in 8.1 seconds–nothing to sneeze at, especially when you can accelerate in high style with twin Browning machine guns firing at the bad guys via your rear taillights.

The DB5 only figured in 13 minutes of combined footage in Goldfinger, but that was enough to propel it to iconic heights. In total, fewer than 900 DB5’s were produced between 1963 and 1965. A resurgence in James Bond fandom in the 1990’s propelled car values upwards exponentially; although they might have been sold for $100,000 each in the ’80s, collectors started grabbing up models more recently. Most of the Aston Martin DB5’s sold in recent years have fetched more than $1 million, with the handful of cars actually used in Goldfinger’s production enjoying estimated collector car insurance appraisals upwards of $4 million.

Today, one of a handful of remaining fully-gadgeted DB5’s, a collector car produced to promote the movie Thunderball, resides in the hands of a collector who purchased it at auction last year for $6.4 million. Its spy-gadget accoutrements mean it’s not technically street legal, but who’s going to argue with a car armed with .30 calibre machine guns?

Though only a few hundred original DB5’s are still on the roads, the James Bond ride of a lifetime is making a comeback. This year, despite the complications posed by COVID-19, a limited run of 25 Aston Martin DB5’s is being produced as part of the company’s Continuation line. Most of these remakes have already been sold at a price tag of $5.2 million. According to the company’s production team, about 4500 work hours goes into each Aston Martin DB5 Continuation model.

Continuation models feature much of the same James Bond gadgetry as the original film cars, with the state-of-the-art upgrades you’d expect of a 2020 luxury car. Non-lethal replicas of the original Browning machine guns, battering rams, a removable ceiling panel to complement the passenger ejector seat, an oil-spray system that actually fires water, and simulated tire slashers are just a few of the spy-era paraphernalia that you’ll find on the newest DB5 models. Only a couple are still up for grabs, so what are you waiting for?